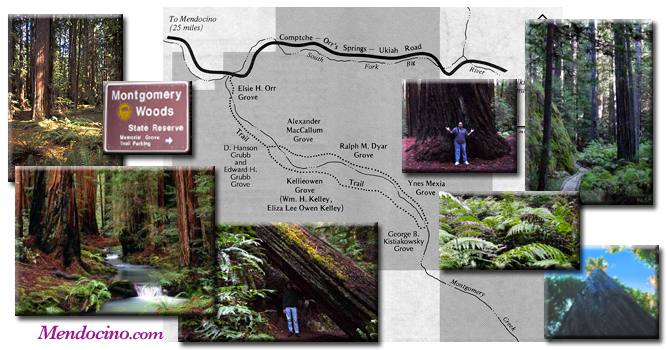 Ever since the "Worlds Tallest Tree" was discovered in this grove, many have sought to disprove it. Some say there must be another - mostly to protect this marvel from the inevitable trampling.

Montgomery Woods, is an 1142 acre State Reserve located on both sides of the Comptche-Ukiah road about fifteen miles west of Ukiah and thirty miles east of the town of Mendocino. It is an excellent example of both a magnificent coastal redwood grove and a beautiful fern forest.

The Reserve was originally acquired in the 1940's through the efforts of the Save-the-Redwoods League, a group that has generously labored to preserve natural redwood groves since the early 1910's and donated to State Parks. From an original gift of 9 acres, donated by the a landowner Robert Orr in l945, the grove has grown to its present size.

The redwoods you will see here, while walking the trail , are among the two main species of redwoods in the Western United States. The taller Coast Redwood (Sequoia sempervirens) grows along the California coast into Southern Oregon in an area about 500 miles long by 20 or 30 miles wide. The Sierra Redwood (Sequoia gigantea) also called Big Tree, is both older and more massive but rarely attains the heights of its coastal relative.

The Sierra redwood grows at higher elevations, which is why it can be found in the Sierra mountain ranges. The Coastal redwood favors moderate temperature with lots of moisture. They fare especially well in areas of heavy fog, where the soil rarely dries completely. The coastal redwood is the tallest tree on earth, measuring up to 370 feet in height. The Coast Redwood grows best on river flats and stream junctions, where they receive a rich supply of alluvial soil, or silt, deposited there by flood waters.

Take care of and cherish what you have, everyday! Spend time with your family appreciating nature, while you can!